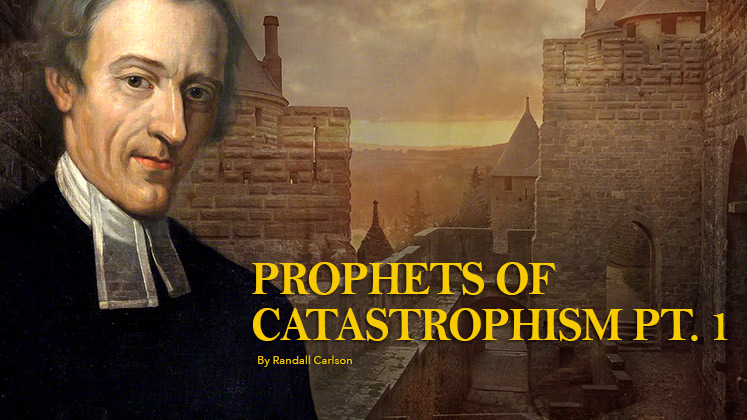 I should explain how in the days of Earth science, from the late 1600s to the mid-1800s, the first geologists were generally called natural philosophers since geology did not then exist as an academic discipline. In one form or another almost all of them were Catastrophists. These men looked at the world around them with a deep curiosity and came to believe the direct evidence of the landscape revealed the imprint of major upheavals in the order of Nature.

It is unfortunate that the social mores of the time made it difficult for women to engage in scientific pursuits until the late 19th and early 20th century, and there are, therefore, to my knowledge, no writings on Catastrophism by women from those very early days. Perhaps the remarkable Mary Anning is an exception. But I will add that in the late 20th century to the present that deficiency has been amply rectified. Throughout my research over the years I have frequently cited cutting-edge work being done by highly accomplished women scientists from the fields of geology, astronomy, paleontology, anthropology, crystallography and so on. Many women scientists and scholars are now making major and significant contributions to the newly-evolving paradigm of a dynamic Earth, cosmic ecology and deep history.

Nevertheless, my goal here will be to demonstrate that in some respects geology has come full circle after spending more than a century wedded to the idea that almost the entire history of the Earth can be explained by reference to modern processes.

This is the Uniformitarian creed and as useful as it has been as a diagnostic tool, it has some major limitations, not the least of which is that many processes that have been operational throughout Earth history do not have a modern analog, at least in terms of scale or rates of change. The descriptive tagline of this model of change underscores its strict gradualism: “one grain of sand and one drop of water at a time” and, given enough time can, supposedly, explain the full range of geologic and geomorphic evidence available for observation and analysis. However, if we limit our thinking to only rates and magnitudes of change such as we have seen since the inception of observational geology, we are excluding an entire class of phenomenon that, in the final analysis, will almost certainly be recognized as the dominant mode of global change.

To demonstrate the prescience of those esteemed founders of geological science, I will begin by going back some 300 years to the work of John Woodward (1665-1728), professor of Physics at Gresham College, London, and a member of the Royal Society. After extensive explorations of quarries, caves and coal mines, Woodward was led to a belief in a vast flood which he associated with the Biblical deluge. To this flood he attributed, with certain exceptions in the plant and animal kingdoms, the dissolution of the whole surface of the globe. To the settling out of this solution he attributed the horizontal stratification of the rock column and the sorting of the various kinds of fossils. This idea for the origin of fossils is, of course, completely antiquated, and Woodward’s attempts to conflate the evidence of the field with the Noachite flood from the Old Testament was vastly oversimplified. Nonetheless, he believed the landscape preserved evidence of massive flooding, and, ironically, as we now know, it does.

Sir Edmund Halley, who used Newton’s laws of gravitation to compute the orbit of the comet that bears his name and was thereby able to predict its return, also speculated that encounters with comets played a major role in Earth history. Like Whiston, he assumed Noah’s flood to be historically authentic, and proposed a comet as being the instrument of causation. In a paper presented before the Royal Society in 1694 he describes his conception of the effects of the“choc” (shock) of a cometary impact on the Earth, “…I have proposed the casual choc of a Comet, or other transient Body. . . the great Agitation such a Choc must necessarily occasion in the Sea, sufficient to answer for all those strange Appearances of heaping vast Quantities of Earth and high Cliffs upon Beds of Shells, which once were the Bottom of the Sea; and raising up Mountains where none were before, mixing the Elements into such a Heap as the Poets describe the old Chaos. . . That some such thing has happened may be guess’d, for that the Earth seems as if it were new made out of the Ruins of an old World, wherin appear such Animal Bodies as were before the Deluge. . .“

At the present time, one who considers the geological ‘state of the world’ in the light of the most recent research, must soon conclude that the Earth does indeed seem “as if it were new made out of the Ruins of an old World.” Halley clearly leaves open the possibility of multiple catastrophes, and, in fact, the more accurate understanding of the geological record amply demonstrates that there are ruins within ruins of former worlds.

Along with Halley, William Whiston would have to be ranked as one of the first scholars from the time of the Enlightenment to advocate cosmic encounters as an explanation for important events in Earth history. Born in England, he was a theologian, mathematician and historian. Like many learned men of his era, he was an adherent of the Mosaic account of creation and his scientific work was an attempt to interpret the newly emergent geological evidence within that framework. Despite his theological partiality, Whiston was one of the important scientific minds of his generation, occupying the Lucasian Professor of Mathematics chair at Cambridge from 1703, following as successor to Isaac Newton in that position.

In 1696 Whiston published the first edition of his work “A New Theory of the Earth from its Origin to the Consummation of all Things…”, culminating a twenty-year consideration of geological processes, in which, among other things, he sought to explain the biblical creation and the Deluge of Noah in naturalistic terms.

In this regard, he made an important step by attempting to explain natural phenomenon outside the scope of modern experience without recourse to the supernatural or the miraculous interposition of Deity. An important component of Whiston’s theory as set forth in his New Theory was that the Great Flood of Noah was unleashed by the proximal passage of a large comet – the vapors of the comet’s tail condensing as the great rain which poured itself upon the Earth. In the almost three centuries that have transpired since Whiston penned his controversial work, the idea that objects from space have played a dominant role in Earth history has gained increasing credibility as the pace of discovery has accelerated.

Writing in his New Theory, Whiston foresaw the possibility of a major role for exogenic phenomenon in the history of the Earth: “We know no other natural causes that can produce any great and general changes in our sublunary world, but such bodies as can approach to the earth, or, in other words, but comets”. And “we may observe a new possible cause of fast changes in the planetary world, by the access and approach of these vast hitherto little-known bodies to any of the planets”. (Whiston, 1696). What we now know underscores how far ahead of his time that Whiston really was.

Like Halley and Whiston before him, the famous French naturalist Comte de Buffon (1708-1788) in the Epochs of Nature envisioned the formation of the Earth and other planets as the consequence of a collision between a large comet and the Sun.

George Cuvier is considered the ‘father of comparative anatomy’, the acknowledged founder of paleontology, and is regarded as a giant among early 19th century scientists.In the year 1795, Cuvier was elected as the youngest member of the prestigious Institut National in Paris. At the Muséum, Cuvier made extensive studies of both invertebrates and vertebrates and read his first scientific paper at the opening of the Institut in April of 1796. In this paper he addressed a question that still compels our attention over 200 years later, namely, the extinction of mammoths and other large quadrupeds in an epoch immediately prior to the advent of the historical record.

It is his thoughts on the demise of this extinct elephant that pertains to our inquiry here, and so we will let Cuvier speak for himself. (from a 1997 translation by historian Martin Rudwick)

“Everyone knows that bones of enormous animals are found underground in Siberia, Germany, France, Canada, and even Peru, and that they cannot have belonged to any of the species that live today in those climates. The bones that are found, for example, throughout the north of Europe, Asia, and America resemble those of elephants so closely in form, and in the texture of the ivory of which their tusks are made…Other bones have appeared to be those of rhinoceros, and they are indeed very similar: yet today there are elephants and rhinoceros only in the tropical zone of the Old World. How is it that their carcasses are found in such great numbers in the north of both continents?”

Those carcasses continue to be found in great numbers to this day and the question Cuvier posed back in 1795 is still being hotly debated. But, after a century of trying to settle the question by relying exclusively on gradualistic processes, the time has come to admit that only some manifestation of catastrophe has any chance of resolving the issue of the extinction of the great terminal ice age megafauna. The implications of the situation were clear to Cuvier:

“All these facts, consistent among themselves, and not opposed by any report, seem to me to prove the existence of a world previous to ours, destroyed by some kind of catastrophe. But what was this primitive earth. . . And what revolution was able to wipe it out, to the point of leaving no trace of it except some half-decomposed bones?”

In October of 1798 Cuvier read another paper at a public session of the Institut.

“There is no longer anyone who does not know that the earth we inhabit shows everywhere clear traces of large and violent revolutions; but it has not yet been possible to unravel the history of these upheavals. . . The bones of quadrupeds found in the interior of the beds that form our continents are one of the most remarkable results of these revolutions. The thorough investigation of them that has been made in recent times has shown that they almost always come from animals alien to the climate in which they are found, or even from animals entirely unknown today.”

These early giants of natural science, like others who came after them, saw a role for catastrophic upheavals in the history of the Earth, including the possibility of cometary triggers. Their observations have been vindicated and have raised questions that require answers now more than ever.

There is much more that we can learn from the early Catastrophists, so to their work I will return.