Home › Blog › GEOCOSMIC HISTORY › 5. “On things dug up from the Earth” 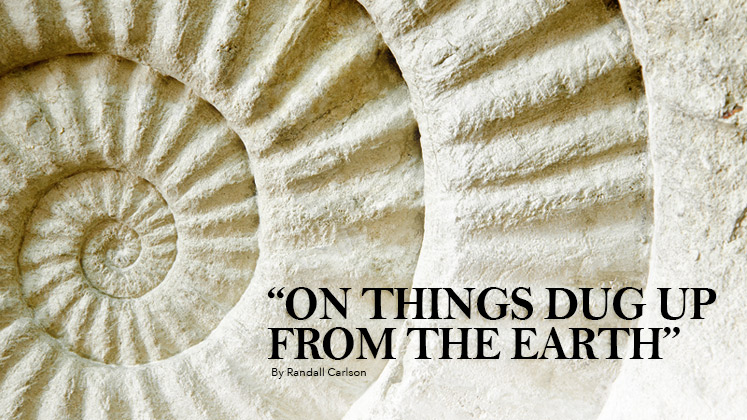 There will always be those few people who look beyond the superficiality of everyday life in search of a deeper meaning. They instinctively know that there is a reason and purpose to existence, but at the same time realize that such deeper meaning does not yield itself up to mere cursory consideration.

To obtain a measure of this deeper understanding of existence is to attain wisdom.

To some seekers of wisdom this quest takes the form of deep philosophical introspection and meditation, to others the joys of helping those less fortunate, to others it manifests in the satisfaction of creative work and enterprise, and still to others in the development of mind in the pursuit of scientific and intellectual understanding of the world and universe. But whatever form the quest may take, for most aspirants it demands unceasing dedication and commitment for there to be any possibility of achieving the goal. Yet, at the same time, a path so trodden brings a fulfillment and satisfaction that eludes those limited only to everyday concerns, as indispensable as those concerns must be. So, this is not to say that there is no role for the commonplace in realizing a full and valuable life, only that the day to day routines, in their demands upon our attention, and the vain pursuits of an endless succession of distractions, must not overwhelm the necessity of aspiring to a higher understanding of the purpose and meaning of existence.

It is a matter of proportionality.

Science now confirms that the traditions handed down from old amongst all peoples and over all the lands of the Earth, are not the imaginings of primitive and ignorant, fear filled savages who invent psychological fables for the purpose of insulating themselves from the uncertainties and fearsome unknowns of a perilous world. Rather, they represent intelligent expressions of a sophisticated understanding of science and nature expressed symbolically and mythologically.

Science, like culture, in the ancient world may not have looked anything like we might imagine it, using exclusively ourselves and our modern world as the frame of reference. Given that, and the severity and frequency of the catastrophic upheavals that have been inflicted upon this planet, should we limit ourselves to believing that there is no possibility of the former existence of a ‘lost’ civilization?

However, until the advent of the new catastrophism in the 1980s, the prevailing and only accepted view was that, with the exception of purely local or regional disasters, global change could be accounted for exclusively by reference to modern processes working slowly over long periods of time. It was this mindset that made it so challenging for J Harlan Bretz to receive a fair hearing from the academic geological community who, in the 1920s and 1930s, rejected his hypothesis of a diluvial catastrophe in eastern Washington without even looking at the evidence.

While that strict gradualism began to dominate geological thinking in the final quarter of the 19th century, and prevailed for at least the next hundred years, it is instructive to go back to the origins of the scientific understanding of Earth history to get a better perspective on the road traveled.

The period of the Enlightenment from approximately the mid 17th to the mid 18th Centuries, with its newly acquired appreciation for rationalism, was characterized by a growing interest in a scientific explanation of Earth history. By the early 1500’s, Girolamo Fracastoro had attributed the presence of fossils in rock to the preservation of real organisms that had once existed, as contrasted with prevailing beliefs that they were lusus naturae that is to say, ‘sports’ of nature, or even the handiwork of the devil, emplaced to test the faith of the believer. Girolamo acknowledged an emerging idea that at least some of the fossils may have been entombed in the rock as the result of Noah’s flood, but he also recognized that the distribution of fossils across many strata of rock implied other agencies of preservation, acting over longer periods of time than the 5 months or so typically allotted to the Biblical Deluge.

In the interval of time from Girolamo to the early 17th Century, there appeared works describing the assaying and smelting of metals, the location and treatment of various ores, various works on mineralogy, and other works, all more practical than theoretical. Many alchemical treatises of the time described various operations related to the working of ores and metals. It was during this period that geomagnetism was first studied scientifically. Also, by the second half of the 16th Century there had appeared works illustrating a variety of fossils, such as De rerum fossilium, or, On things dug up from the earth, by Konrad von Gesner. But, geology as a systematic, coherent discipline had not yet materialized. Discoveries related to the study of the Earth during this period were not so dramatic as those occurring in astronomy, physics or chemistry; however, this imbalance was to be rectified with the commencement of the 18th century.

Until this time is was widely believed that the age of the Earth was no more than 5 or 6,000 years, based upon Biblically derived chronological assumptions as to the duration of time since the creation of Adam. However, throughout the 1700s, ongoing interest and curiosity regarding the origin and formation of the Earth, the formation of rock strata and the evidence of earlier life that certain types of rock displayed, all contributed to an evolving concept of the Earth and its history and stimulated an increasing amount of field observations and study.

As a result of this accumulating body of observational evidence, the belief that the Earth was much older than the conventional Biblical timescale was becoming widely accepted. It was recognized that successive strata of rock were laid down on top of lower, pre-existing rock strata, and hence, the lower strata were older in age, while the higher the rock was in the strata pile, the younger its age. This became known as the principle of the superposition of strata. It was also becoming clear that the various kinds of rock, specifically sedimentary, metamorphic and igneous, represented a wide variety of depositional environments, and, that these environments had changed considerably over time.

It had been noted that the fossils contained within the successive strata had a definite order and distribution depending upon their position within the stratigraphic column. With the acceptance of this principle of faunal succession it became possible to begin a chronological correlation of various exposed fossiliferous rocks throughout the British Isles and continental Europe. The conclusion forced itself upon those early students of geology that the age of the Earth had to be much greater than that authorized by the self-appointed Biblical exegetes who demanded a literal reading of scripture.

Thus, there arose a conflict between the official, theological view, which attempted to impose a dogmatic straight-jacket upon the interpretation of ancient scriptural traditions as regards the age and formation of the Earth, and the empiricists who relied upon their own observations of nature in drawing their conclusions. As the 19th century proceeded, established religious beliefs and dogmas lost their dominance over the intellectual life of man and it became possible to develop the idea of a very old Earth as demanded by the evidence of the rocks. At the present time the Earth’s age is accepted as 4.6 billion years, and, the systematic study and categorization of the stratigraphic column that began some three centuries ago is still continuing and has led to development of the system of rock classification universally employed by present day geologists, although with substantial advancement and refinement.

While the early forays into Earth history were doubtless prejudiced by a major reliance upon scripture for validation and interpretation, they nonetheless contributed to a growing body of observations, debate and conjecture that laid the groundwork for the emergence of Geology as a valuable and important field of scientific inquiry in the late 19th Century. If there is an element of historical fact or validity to scriptural accounts it follows that the conceptual framework of early Catastrophism, which was frequently associated with scripturally derived beliefs, likewise, contained an element of historical and scientific truth, which would have been overlooked by those who adhered to a strictly gradualistic point of view, and, to whom the Scriptures contained no information of scientific value.

At the present time there exists an overwhelming abundance of hard evidence from diverse fields of investigation that confirms the ongoing reality of large-scale natural catastrophes and environmental changes, both before, and during the time of Man. That these great disasters, many involving fires and flooding on a vast scale, are consistent with early beliefs based upon the Bible and countless other sacred or mythical traditions, is a fact that should not be disregarded or dismissed. The early catastrophists of the 18th and 19th centuries, unencumbered by allegiance to prevailing academic dogmas, trusted the evidence of their senses and acknowledged the reality of tremendous events outside the scope of modern historical experience.

For many of these early geologists, the fact that the evidence of the field seemed to support the idea of a colossal flood, or floods, seemed only to confer upon Biblical sources an additional degree of validity. But, again, it should be emphasized that many of the early geologists, while accepting of the scriptural accounts to varying degrees, did not reach their conclusion regarding the geological reality of a great flood from their Biblically derived beliefs, rather, it was the hard evidence of the field that convinced them. And, it is this evidence that now demands our attention if we are to have any hope of understanding our human past on this planet.

For more than two centuries now the Earth has been yielding up her secrets to those with the curiosity, the commitment and the audacity to probe the unknown, who take nothing about the world we inhabit for granted, who behold a great mystery in the forms and features of the landscapes upon which our human existence is unfolding and evolving and upon which it depends.

With this ongoing development in the understanding of Earth’s processes and evolution, the foundation has been laid for unsealing the epic story that lay preserved and concealed in the rock layers of the planet, the “bones of the Earth” as they have been called, and the juxtaposed landscapes that give flesh to those bones.