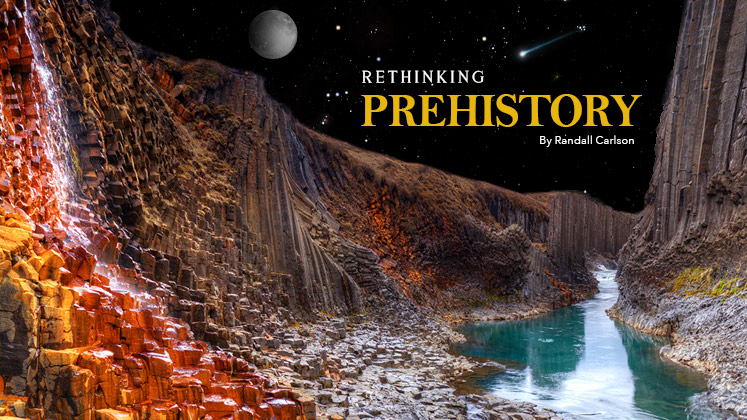 Is it time to rethink prehistory?

This is the question I raised at the conclusion of my last post. I can say that the answer to that question is an unequivocal yes.

I would even go so far as to say that understanding of our own human past on this planet is only in its infancy. I have referred to the veil that separates this world age, the age of the ‘whole recent’ that is, the Holocene Epoch, from that which came before, a world dramatically different from the one in which human culture ostensibly rose from a primitive, nomadic, hunter-gatherer existence to the pinnacle of the global civilization upon whose threshold we are now poised.

It is appearing increasingly likely that history, as we generally conceive it, encompassing the span of time since the invention of writing circa 3,000 to 4,000 B.C. and the concomitant development of systems of record keeping, is but a thin veneer juxtaposed upon a veritable deep history whose spectral outlines are only now coming into focus

The obsolete, strictly gradualist model of cultural evolution, mirroring that of uniformly incremental biological evolution, has given way to one in which regular and frequent interruptions punctuate the presumed continuum of change. Within the uniformitarian conceptual framework, societies fail primarily due to internal, socio-political factors. Species and global ecosystems are viewed as being in a continuous state of turnover with perhaps 10 percent of extant species going extinct at any given time, while the totality of species is being continuously replenished through natural selection. From the late 19th century up until the 1980s, catastrophic upheavals involving the wholesale extermination of species were not part of the accepted paradigm of global change.

As of this writing, it is clear that was a major oversight.

This is the reality that those of us alive on planet Earth in the early 21st century need to be cognizant of, but which, unfortunately, barely registers on the radar screen of mainstream awareness.

This could, however, change in an instant. A repeat of the 1908 Tunguska geocosmic event occurring today, over a populated region of the Earth, potentially causing a million or more casualties in an instant, would undoubtedly be both a wakeup call and a reality check.

But, would even that be enough to jolt sleeping humanity out of the somnambulistic state in which they now find themselves immersed? We can only hope so, because an event on the scale of June 30, 1908, appears to be a lot more frequent than previously assumed.

As I write this, Earth has just experienced yet another cosmic near miss. On the first day of September, 2020, asteroid 2011 ES4 zoomed by the Earth at a mere 75,000 miles distant, about one-third of the way to the Moon. The size of the asteroid, with a velocity of some 18,200 miles per hour, or 5 miles-per- second, has been compared to that of a jetliner, that is, somewhere between 100 and 160 feet in diameter. This size qualifies asteroid 2011 ES4 as a Tunguska-class object, with an energy release upon impact equivalent to that of a large hydrogen bomb.

Is this what it is going to take to goad slumbering humanity into realizing the planet we inhabit is part of a march larger cosmic ecosystem – one which we ignore at our peril?

There is no question that we must develop a sustainable civilization that can endure in harmony with the Earth. We are truly the overseers and guardians of the one planet in the universe that we know harbors life. The confluence of energy and matter, force and form, that had to occur to bring about the world as we know it is utterly astonishing to contemplate. We are beginning to understand that the planet we call home is the product of a profoundly complex arrangement of parameters whose interactions occur in exactly the optimum proportions to evoke the emergence of sentient life from the matrix of cosmic nature. Were the ratios and tempos of the vast cosmic machine of which our world is an intrinsic part to be changed even minimally, the whole grand phenomenon of terrestrial creation would quickly terminate.

To accept the reality of evolution is not to reject the idea of a creation generated by and infused with intelligence. To an awakened mind the evidence of design is everywhere about us. The blueprint of creation reveals itself in the scale-invariant patterns of the natural world and manifests through the evolutionary progression from simple to ever more complex forms accompanied by ever more advanced degrees of self-awareness. It is as if the universe is becoming aware of itself through the medium of humankind.

Evolution is the product of change and it can occur incrementally or exponentially. The vector of evolutionary progression is bimodal, that is, proceeding with two operational modes. Species evolve and civilizations arise in the generally quiescent and stable phases of global change. Species, and civilizations, are exterminated in the short-lived transitional points between phase-states. Those distinct points within the continuum of evolutionary change were likened, by the late paleontologist Stephen Jay Gould, to punctuation marks in a sentence, and along with colleague Niles Eldridge, introduced the term ‘punctuated equilibrium’ to describe the process.

To reiterate the fundamental idea: Scientific thinking has evolved, as has our ability to perceive the world and the universe simultaneously in ever greater detail and at greater scales. Our understanding of the operating mode of planet Earth is in the midst of a revolutionary upheaval. The model of a gradual continuum of change has been superseded by one of pulsed change, that is, periods of slow, cumulative change interrupted by episodes of accelerated change – upheavals in the balance of terrestrial nature that are orders of magnitude beyond the steady-state background. Change can come slow or it can come fast – sometimes very fast.

As we begin to comprehend the vast extent to which our planetary surface has been repeatedly remodeled by a variety of cataclysms and disasters, including biblical- scale floods, ice ages, asteroid and comet impacts, enormous volcanic eruptions and seismic events, magnetic field reversals and solar storms, for starters, and, as we begin to comprehend how frequently and how recently such events have transpired, we are moved to a considerable degree of circumspection in regards to our present situation as the dominant terrestrial species.

An overwhelming mass of evidence makes it clear that humankind’s efforts at building civilization have likewise succumbed to the vicissitudes of extreme change in the natural world. And how far back this process goes we cannot say at this point. Findings of modern human skeletons are pushing the presence on Earth of modern humans back toward 200 thousand years. In that span of time, encompassing some 8000 generations of humans, numerous globally catastrophic events have occurred, and many of them have been of such magnitude that they would be fully capable of completely wiping out modern civilization were they to occur again, leaving the human race to climb laboriously back out of a new stone age.

Has this happened before? And, if so, how many times?

A strong circumstantial case can be made for the presence on this planet of an ancient civilization of considerable scientific advancement – one whose existence has otherwise been erased from the planetary landscape. There are anomalies in early history and prehistory that defy rational explanation without allowing for a sophisticated scientific understanding of the world and nature on the part of someone whose identity has now been forgotten. There are scattered remains of infrastructure all over the Earth that preserve some measure of this knowledge and by virtue of their vast scale, would obviously have required massive social organization in their undertaking. Conventional models of history and prehistory cannot account for the existence of this evidence, which not only spans the geographical extent of the globe but ranges over vast spans of time measured in millennia.

The rise and decline of previous civilizations, known and unknown, contain lessons of profound importance for modern efforts to build a sustainable civilization.

The problem we face, however, is crystal clear and was summed-up well by the 19th century philosopher, biologist and anthropologist, Herbert Spencer, when he wrote:

“The degree of public concern and anxiety about a social problem or phenomenon varies inversely as to its real or actual incidence.”