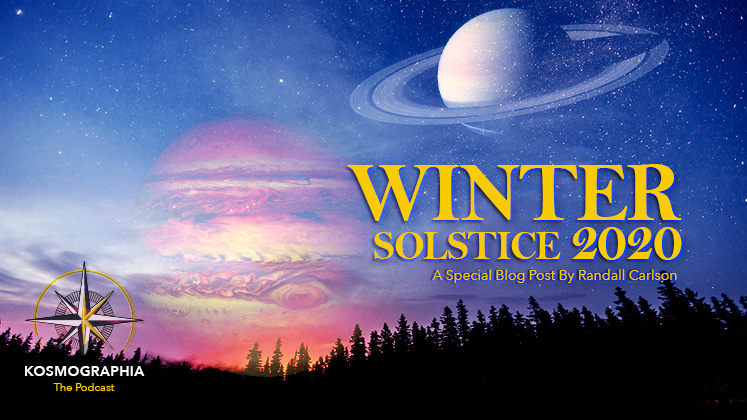 A SPECIAL BLOG  –By: Randall Carlson

DECEMBER, 2020 / Winter Solstice, the longest and darkest night of the year (in the northern hemisphere) will present to astronomical enthusiasts a once in a lifetime celestial event. It has been 794 years (1226 A.D.) since Jupiter and Saturn have aligned so closely that to the naked eye observer they appear as one object ‒ only the Moon will be brighter.

The overtaking of the slower planet Saturn by the more rapidly orbiting Jupiter takes place every twenty years. Due to its much greater distance from the Sun than Jupiter, Saturn’s orbital period is right at 29.457 Earth years while Jupiter’s is 11.86 Earth years. This overtaking is called a planetary conjunction. The apparent close association between two planets in conjunction, in this case Jupiter and Saturn, is due to the fact that the Earth, Jupiter and Saturn all lie in a straight line, more or less, and in this particular conjunction the alignment is very close, lying only 6 arc minutes, or one tenth of one degree apart at their closest passage.

Here is a way to think about the phenomenon: Assume Jupiter is conjunct Saturn. After 11.86 Earth years Jupiter has revolved around the Sun and returns more or less to the same position in the sky. However, Saturn, even though considerably slower in its orbit, has moved on ahead, enough, in fact, that it takes Jupiter about another 8 years to catch up. This means that there is a regular progression of Jupiter/Saturn conjunctions around the Zodiac. The last Jupiter/Saturn conjunction occurred over May 28-29 in the year 2000 against the backdrop of the star constellation Taurus. Prior to that event there was a triple conjunction in 1980 in the constellation of Libra that lasted from late December to early August in the constellation Virgo.

This is the view from the mid-latitudes of the northern Hemisphere facing West/Southwest shortly after sunset on Winter Solstice, December 21, 2020. Sagittarius has just set below the horizon and Capricorn is descending and about to do the same. Jupiter and Saturn at the center of the image are conjunct so closely that they appear to be one object. However, through a telescope or a pair of high-powered binoculars it will be apparent that they are, in fact, separate planets as shown in the next image. The orbital paths of the two planets are shown in orange. The smaller objects clustering about Jupiter and Saturn are their satellites. 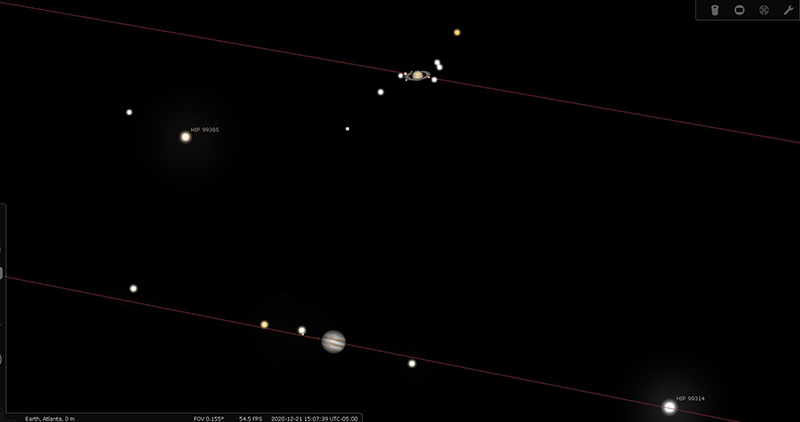 In ancient times the displacement of the reigning king by a new king was tied to the Jupiter-Saturn conjunction cycle, as Jupiter was associated with the young king succeeding the old king symbolized by Saturn. Sir James Frazer explores this tradition in The Golden Bough. He alludes to Roman times wherein he points out that…

“It would seem that the Roman king personated no less a deity than Jupiter himself. For down to imperial times victorious generals celebrating a triumph, and magistrates presiding at games in the Circus, wore the costume of Jupiter.”

It has also been noted that every president from William Henry Harrison, elected in 1840 through John F. Kennedy in 1960, who were inaugurated under Jupiter-Saturn conjunctions, died in office. This list includes Lincoln in 1860, Garfield in 1880, McKinley in 1900, Woodrow Wilson in 1920, Franklin Roosevelt in 1940, and finally Kennedy in 1960.

The “curse” seems to have been broken with the ascendancy of Ronald Reagan to the presidency in 1980, although there was an assassination attempt on his life. However, it should be noted, again, that the 1980 triple Jupiter-Saturn conjunction took place in Libra, and on December 8 of 1980, John Lennon, a Libra, was gunned down on the streets of New York 40 years after he was born under a Jupiter-Saturn conjunction.

Saturn, in his mythical personage was the old god, or king, whose festival was celebrated each year in various cultures, oft times associated with the harvest or the time of Winter Solstice. In Latin cultures his rites were celebrated during the Saturnalia, which lasted for seven days from the 17th to the 23rd of December, during which his reign as god, or king, of the Golden Age was celebrated. Of course, these dates encompass the Solstice, the time of greatest darkness, just prior to the return of the light, which led, in turn, to the celebration of Christmas several days later, by which time it was visually apparent that the Sun had commenced its return to the north, thereby dispelling the increasing darkness.

The Saturnalia was a time of revelry and an inversion of the normal state of affairs. For example, masters traded places with slaves, license to behave in ways otherwise prohibited was granted, a “Lord of Misrule” was elected and so on. A mock king was crowned and at the end of the festival was ritually slain to commemorate the rise of a new king.

In the year 1603, on the 17th of December, the great Renaissance astronomer Johannes Kepler, was observing a Jupiter-Saturn conjunction in the constellation Pisces. This he felt was significant, primarily because, according to his calculations, a spectacular triple conjunction of Jupiter and Saturn had occurred in the same constellation in the year 7 B.C. This phenomenon Kepler speculated, was the source for the Star of Bethlehem account referenced in the New Testament Book of Matthew. It has been confirmed that there was, in fact, a triple conjunction in that year. A triple conjunction occurs when Jupiter is seen to go retrograde relative to Saturn and requires an alignment, not only between the Earth and the two giant planets, but must include the Sun as well.

The association of a Jupiter-Saturn conjunction with the genesis of Christianity can be found in a number of medieval references. In the 1377 chronicles of the Worcester Priory, reference is made to a Jupiter-Saturn conjunction in the constellation of Aquarius in the year 1285. The anonymous author notes that such an event “had not happened since the incarnation.” In this case the “incarnation” refers to the tradition of the birth of a new king under a new stellar configuration ‒ Jupiter usurping the reign of the enfeebled Saturn. The conjunction occurring in the constellation of Pisces was seen as heralding the birth of the king, or god, as the case may be, who would reign over the course of the astronomical age of Pisces, as determined by the great revolving wheel of the cosmos known as Precession of the Equinoxes.

What a rare and spectacular Jupiter-Saturn conjunction on the Winter Solstice of 2020 portends remains to be seen. Yet, to those who pay attention to the greater cosmic reality of which our world is an intrinsic part, what goes on in the heavens undeniably influences what transpires here below.